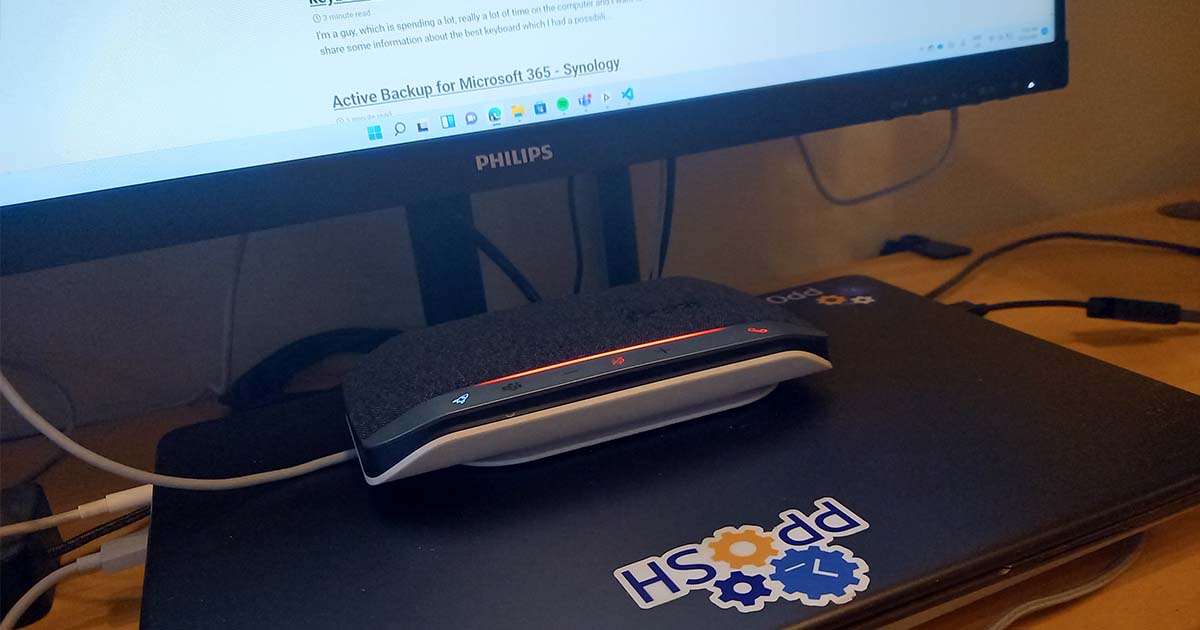 Improve work on your Home Office using devices from Poly!

Some time ago I received a package from Poly that contained two devices. One was a speaker and the second was with the camera. About those two devices, I want to write today short article and show you what I’m thinking about them.

And as usual, that text will be not a fully professional review that you can read on different portals. I want to show you how those devices improve daily routine. 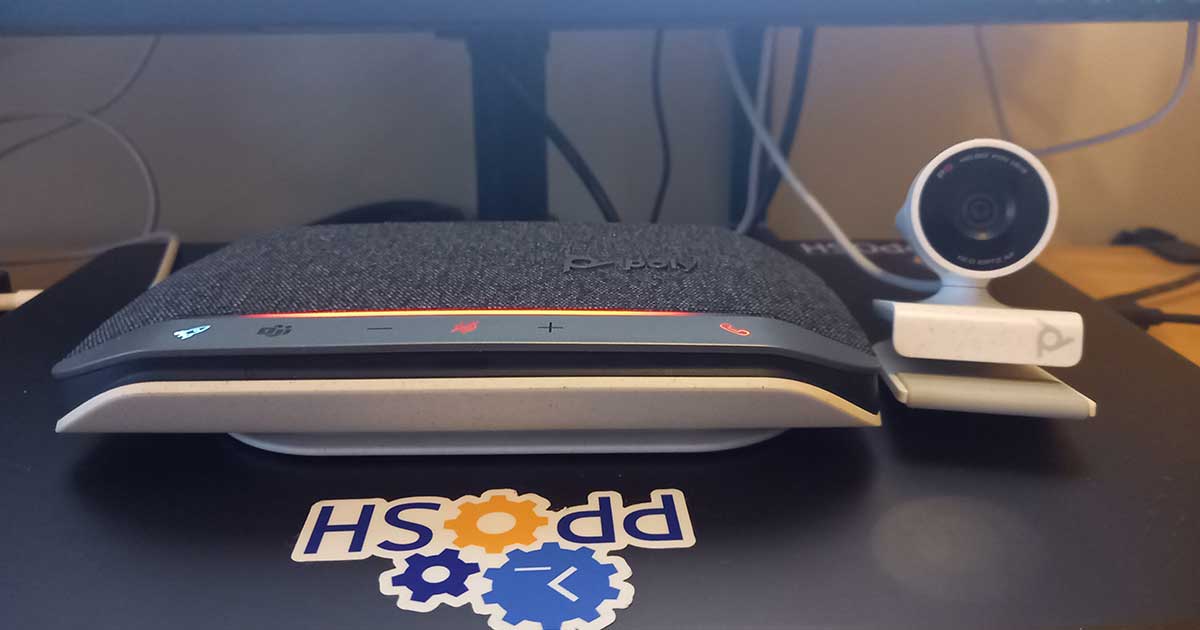 The first product which I want to describe it’s a camera: Poly Studio P5.

It’s a fully corporate camera, which is certified by Microsoft Teams and Zoom. And from my point of view, has a professional picture, but I will don’t show you a pic of me for now. Maybe next time! You need to trust my words ;)

For me, that kind of camera should just work - without additional configuration for the end-user. Plug and play. And that was Poly offered to me.

It’s also tripod ready. What does it is mean? You can mount it directly on the tripod or even ring led - I have mounted my Logitech C920 inside the Ring Led to have a great image on my camera.

But has also an adjustable monitor clamp, which will allow you to mount this camera to a laptop or any monitor. 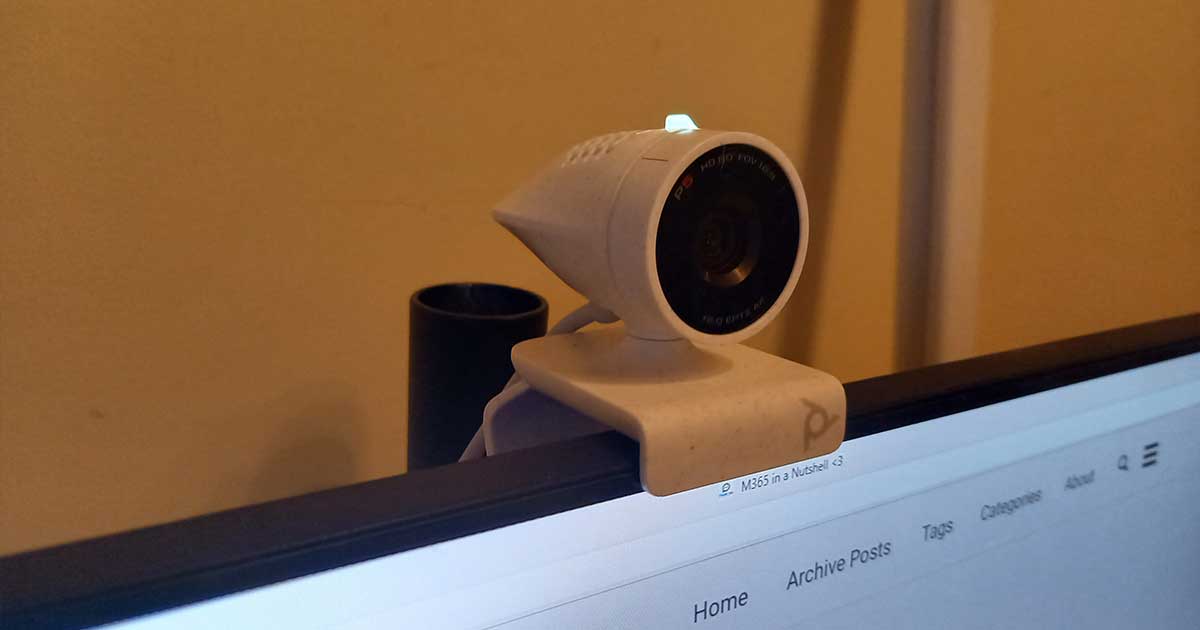 Another thing, which was strange for me - has a built-in USB Type-A port. For what? For example, to connect a BT600 headset adapter for wireless headphones. And… That it’s magic - you don’t need to use an additional USB port on your device to connect your headphones. Just connect this adapter to the Poly Studio P5 and will be working properly. I tested it! 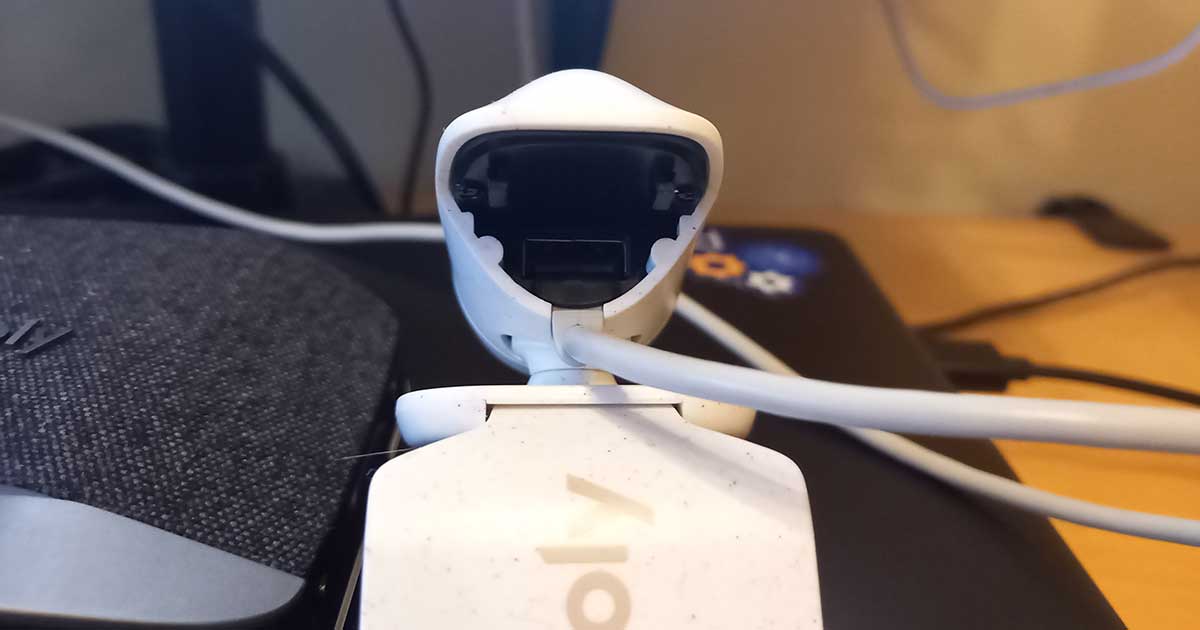 Next thing which I worth to mention: privacy shutter. To start using this camera, you need to open this shutter. But not only “open” but fully open until you hear the “click” sound on the camera. If you don’t do this, you will get a black image only. Yep, that was my first mistake. 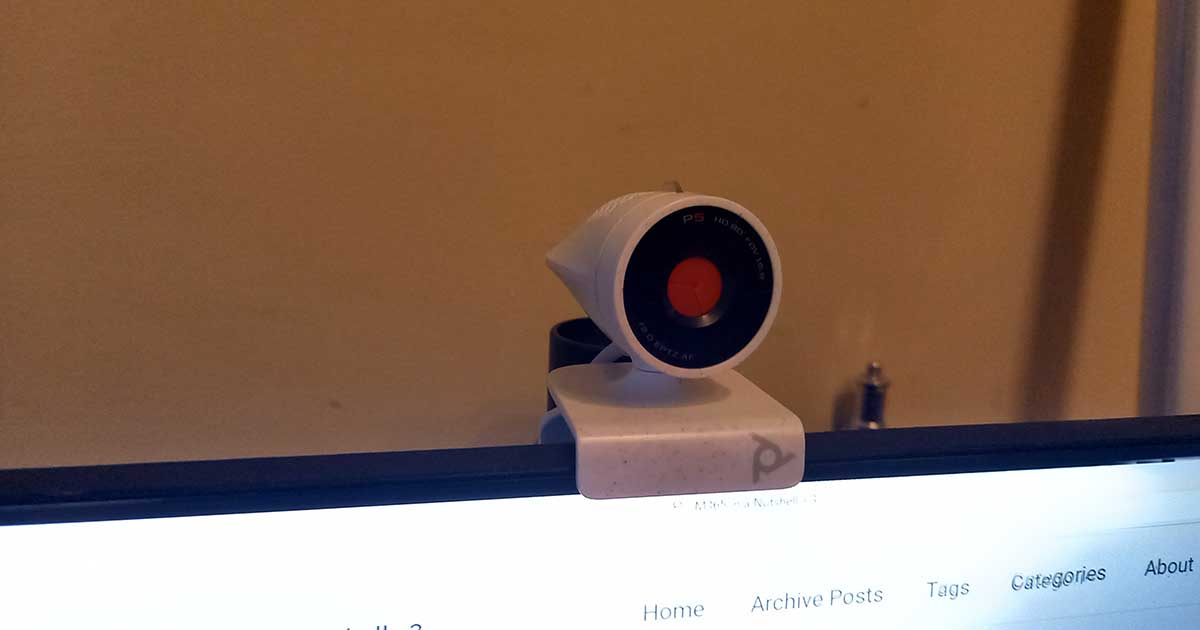 If you’re using this camera with the built-in microphone, there is a status-led indicator, which will tell you if you’re on the call / or on the mute status. You don’t need to check on Microsoft Teams.

About the video and sound.

I’m not a specialist in this area. There are many different reviews where you can find detailed videos in comparison to the other cameras. I can just tell, that video from this camera was great, visible even after turning the main light source. Only the light from my three displays was left and the picture was mostly clear.

But… Maybe it is worth paying more if you get a better image of the low-light spaces?

The second product which I want o show you is a speaker which can be connected to your device by USB-A port, by BT-600 adapter or directly by Bluetooth!

For my daily work, I’m using two Poly devices: B825 and Voyager 5200 - which you can read the review here. Note: This review was written in the Polish language.

In my current job, I’m spending a lot of time on conferences calls and calls with end-users to discuss current issues which I need to resolve. Can be even three to four hours per day. It can be very tiring for wearing headphones for that period of time.

So when I received a package with the personal speaker, which can be used with Microsoft Teams I was very happy, because my ears can finally rest!

So, in a couple of words. It’s an external speaker, which you can use for daily basics, not only to the calls but also for music, movies, etc. You can use it with your device’s USB connection, Bluetooth connection, or use a dedicated USB Bluetooth USB adapter if you don’t have BT on your device. 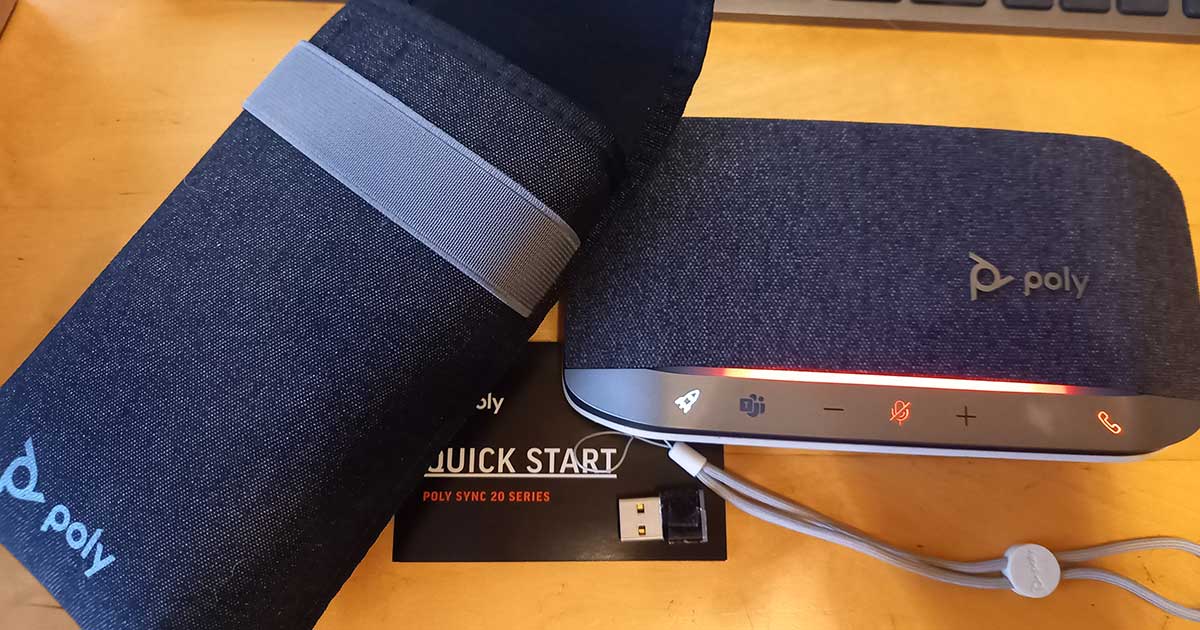 Price is high - it’s starting from 115$, but… From my perspective and the time which I used that device is fully justified. I wasn’t happy when I need to send back this device.

So - as I wrote earlier, I connected that device to my work laptop and used that for MS Teams calls, but also connected to my personal phone, to have a possibility to answer private calls. And I didn’t use the buttons on my phone. I used the buttons on the device because Poly Sync 20 has a built-in programable button! You can answer your MS Teams call using this device, you don’t need to use the mouse to pick up the call. 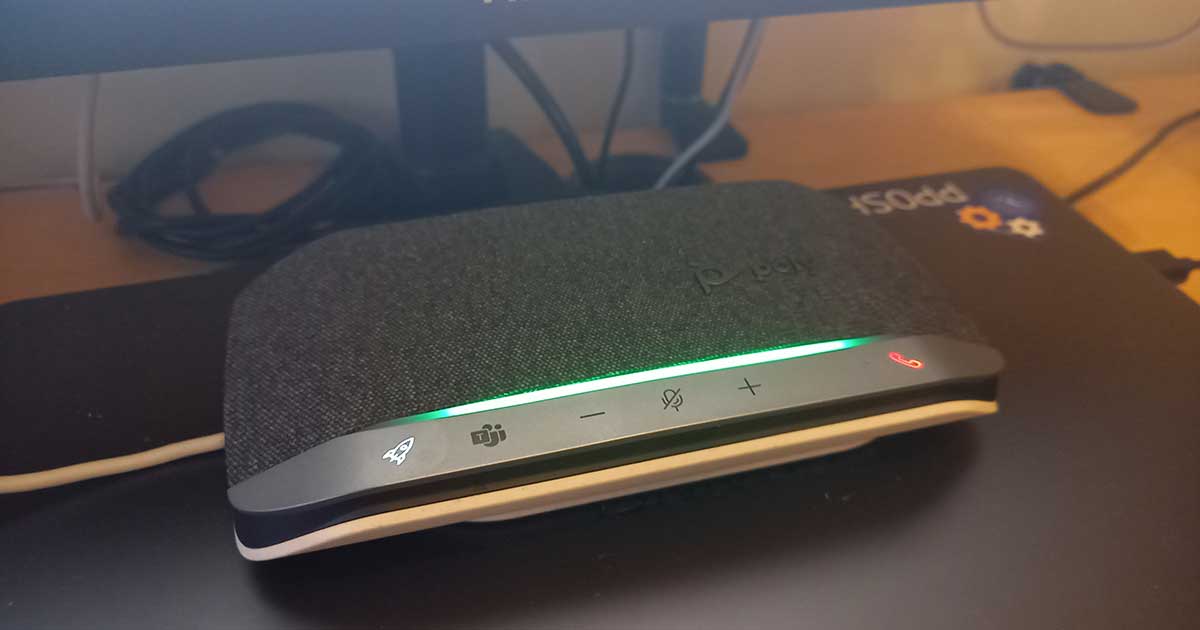 This device can be customized by usage the Poly Lens app. Which can be also used for Poly Studio P5, because I forgot to mention.

The sound from this device was amazing. I know that I have a great voice, but… Maybe next time I will do a quick test between my primary microphone from Behringer and this device if I have the possibility to work with that device again. The device has built-in microphones, which they are following the voice instead of the noise in the background. Probably that’s the reason why it’s working so great. Yep, definitely.

You can take this device outside and connect it to your phone using BT because has a built-in lithium-ion battery which will allow you to use that device for up to 20 hours. And - it’s IP64 - dust and water resistance. 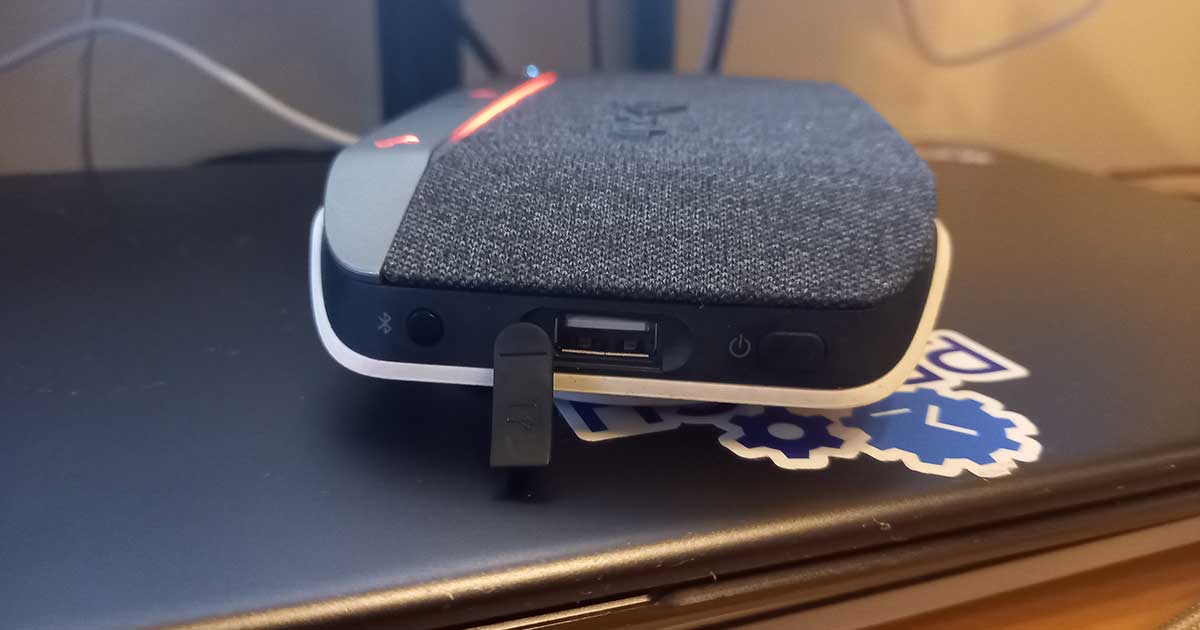 The couple of weeks in which I had this device was great. Finally, I don’t need to wear headphones. I can listen to music during my work and hear what it’s happening outside of the room.

If I had a chance to buy this device for personal use - yes. Definitely. Because was changed my daily work in the home office.

You may also enjoy

Create profile for Data Collection for Devices in MEM

How to start collecting data from devices that are used with MEM?

A long time with Sonos Move on my home…

Last time I showed you how I deployed WAC on my HomeLab. Now I will show you how to deploy a Self-Signed certificate from WAC to other devices.